100stories: I am a Damn Bumblebee 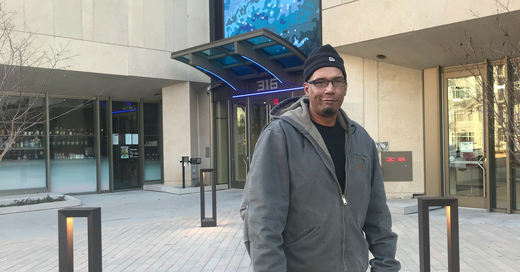 By Ulysses Dinkins, as told to Violet Jinqi Wang

Whenever I meet someone new, I have to prove my merit to them.

After all, I am a carpenter. I didn’t go to business school.

In my 13 years as a carpenter, I’ve seen the worst of the worst. I’ve gotten stuck in a lift 60 feet in the air during a snowstorm, with no one nearby to help. I’ve seen my friend get hit in the head with a chunk of wood falling from 40 feet. I’ve seen my coworkers die on the job. But I’ve also spent my evenings kicking back beers with my union brothers sharing stories of the hellish conditions we experience. We have shed blood, sweat, and tears together.

Among my union brothers, my name is gold.

In the Madison startup community? I was a complete outsider until two years ago.

I was at the lowest point of my life. I’d been laid off from a big construction company and, just a few days later, thrown out of my apprenticeship. I was in the middle of filing a civil rights lawsuit.

One night, I stopped by my union to pick up a bag of food from the pantry, and I got to talking to my former superintendent about an idea I had for a product. That was the first time I publicly spoke about my idea

Most accidents in the construction field stem from simple things that could have been avoided. It all comes down to communication or lack thereof. My idea is to build a smart device that provides a hands-free audio and video communication link between construction workers and their supervisors.

The way I saw my superintendent’s eyes light up when I described it, I knew I had something. I knew it could impact the lives of my union brothers positively. I wanted to create it, and I wanted to do right by them.

I dropped the civil rights lawsuit and started calling up venture capitalists.

Of course, they all turned me down instantly.

To build a team, you have to know the right people. The networking process is bizarre and full of surprises. It’s all the stuff they don’t teach in business school. You meet one person, it leads to three others; then you realize how small the circle is. Everybody knows each other. And if you meet the right person, doors will open up for you.

For me, that person was Jeremy Udovich.

Jeremy was one of the first people I met at 100state. As a regional sales director for HiQo Solutions, Jeremy is heavily involved in the Internet of Things, and has many connections in tech in Madison (and around the world).

The first interaction I had with him was very interesting. On instinct, I asked him to sign a Non-Disclosure Agreement before I told him about my idea. Looking back, I realize how important that was. Without that agreement, I don’t think he would have taken me seriously.

Jeremy introduced me to business coach Allen Dines, and eventually, a whole cast of characters in the Madison tech scene who would help me inch my dream closer to reality.

But before I could earn their trust and even think about inviting them to join my team, I had to pass my first test: getting a patent on my idea. I had already enlisted the help of the law firm Boardman & Clark to guide me in that process, but I still had to bust my butt to complete that first provisional patent.

That patent validated my merit as an entrepreneur. With that patent in hand, new doors started to open for me. Mentors and potential partners paid more attention to me. My lawyers agreed to trade additional services for a small equity stake in my business.

That’s when I knew that I had a high-value product.

I started to get invitations to meet with investors. I had investors calling me, asking me if I thought something was worth investing in. I never imagined that one day, people would come to me for advice.

Looking back — I feel like a lot of things happened by divine plan.

From time to time, I would meet people who wanted to take advantage of me. I got rejected and not taken seriously. I got immersed in self-doubts and couldn’t sleep some nights.

Every day I would wake up with questions in my mind: What am I doing today? Am I doing the right thing? What am I going to get out of this? There was nobody there telling me what to do. How could I get people to take a leap of faith and trust in me?

There were plenty of hiccups along the way. Several products with similar applications hit the market, including one specifically for the construction industry. When I first saw them, I lost my stomach. I thought, “Oh no, is that it?” Even Google Glasses gave me a scare.

But now I see that those products were another chance to validate my product, to prove that it has a large and profitable market. And the people on the development teams of those products know nothing about what it’s like to be a construction worker. That is my edge. Anything they can do for the market, my product can do better.

In April 2017, I got my non-provisional utility patent. In August 2017, through an event at Forward Fest, I met Toby Klusmeyer, CEO of Pro-Active Engineering, a printed circuit board manufacturing company. Now Toby is my co-founder. This is a game-changing step for me. Now I can deliver.

I can create a new industry standard for safety and efficiency on the jobsite. I genuinely believe the best products can only come from someone who understands the life of a construction worker.

Now I’m ready to take my idea back to my union. It’s not some immature concept made by outsiders. I have the team. I have the connections. I can do this right.

The process of building my team — proving myself over and over — has been humbling. I have not allowed my ego to swell. Ego won’t get you anywhere fast. I have learned so much, yet every day I feel like I have never known as little as I do now.

I am realizing that I am like a bumblebee.

Why do bumblebees fly? Because no one ever told them that they can’t. They don’t know that aerodynamically, they shouldn’t be able to fly. They fly anyway.

I am a damn bumblebee.