100stories: I’m a blockchain skeptic, but I’m all in 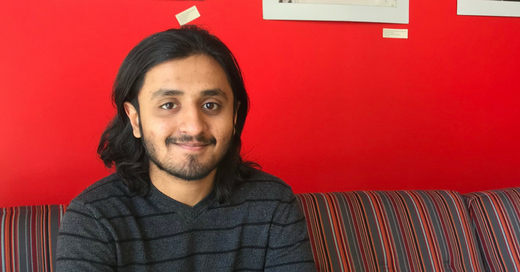 By Sid Ramesh, as told to Olivia Barrow

There’s something about blockchain to me that’s way addictive.

But I wasn’t that excited about it when I first heard of it. Five years ago, I would never have expected that I would take a leave of absence from college to pursue a career in blockchain.

I have always wanted to work in emerging technologies, and when I first enrolled at UW-Madison, I was most interested in the Internet of Things. I had read about blockchain on Reddit, but I didn’t take it seriously until a family member, who worked for IBM, encouraged me to look for blockchain opportunities. So the summer of 2016, I interned for IBM doing blockchain research and software engineering.

My research involved reading a lot of academic papers, and building internal prototypes on top of IBM’s Blockchain platform. Blockchain touches so many different domains — it builds on the fields of applied cryptography, game theory, distributed computing, and behavioral economics, among others.

For some people, blockchain technology means an opportunity to get rich speculating on the most famous cryptocurrency, Bitcoin. But that’s not me. I’m more interested in the underlying technology of blockchain, and what it could do in the future, than in most of the applications of the technology available today.

A blockchain is a public ledger that records transactions in chronological order. Transactions can’t be edited, added, or deleted, and the whole ledger is stored on millions of computers around the world, making it a decentralized system that doesn’t rely on trust in one organization.

In concept, this technology has a lot of exciting potential uses, including making international financial transactions cheaper and more secure, making supply chains more efficient, and even improving food safety. But as of now, it’s too expensive and slow to scale it up for most businesses to use it efficiently.

That’s why I think reading project white papers — the essays in which new blockchain-related companies pitch their concepts — is a waste of time. For one, most of them aren’t very technical, and two, I think a lot of the developments in the blockchain space are getting ahead of themselves.

For example, financial services companies are interested in using blockchain for processing transactions, but the process takes too long — sometimes as much as 10 minutes — for an organization that needs to process thousands of transactions per second.

When it comes to improving food safety and supply chains, there are many lingering questions. When combined with Internet of Things (IoT) devices, a blockchain could help track movement of goods and verify that the records about those goods are not tampered with.

But what it can’t do yet, is bridge the gap between the digital world and the physical world. A blockchain alone can’t distinguish between a physical good that has been tampered with and one that has not. Smart monitoring devices could help, but only if those devices are secure and tamper-resistant themselves. Unfortunately, a lot of the development in IoT has not focused on security.

I think we’re at least a year away from that. We need more people working on the infrastructure of blockchain to make it more scalable for all of the imagined use cases.

If you can’t tell, I’m a bit of a skeptic about blockchain. I know it’s going to exist and it’s going to be pretty prevalent in the future, but I see a lot of holes in it.

So it might be surprising that I chose not to go back to UW for the spring semester of my junior year. I had been studying industrial engineering, with a minor in computer science. But the deeper I got into blockchain, the more invested I became. I started consulting on the side after my internship last summer, with Symbiont in New York. When I came back to school in the fall, I realized I was half-assing school and half-assing my work in blockchain. I wanted to be able to focus, so I chose to put college on pause and start building my career in blockchain by launching Chainguru.

Now I’m consulting with businesses, mostly in the financial services space, who are interested in blockchain and are trying to build a strategy around how to approach it. I give them broad strategic advice, and help them find their focus so they don’t just spin their wheels in this massive, dynamic industry.

Because it’s so hard to keep up. A week in blockchain is like a year in any other industry. It requires constant learning.

And because it’s so new, there’s still room for anyone to get involved.

The industry as a whole is lacking a lot of talent, both technical and general. One thing that frustrates me is seeing smart people who got started in blockchain, but are now starting crypto hedge funds or going to work for venture capital firms, instead of actually working on the infrastructure. They’re following the money, but we still need their talent for development.

We also need non-technical talent. As we develop the infrastructure, we need new perspectives — anything from sociology to ecology to political philosophy — to help us prepare for all these potential use cases.

That’s why I started the Badger Blockchain club at UW and then helped start the Meetup group Madison Blockchain. Both groups aim to serve as a gateway for the Madison community to get involved with blockchain. We host speaker events, and we try to keep the discussions as high-level as possible, to be accessible for the general public.

Blockchain needs to be more accessible for everyone. We need more women and underrepresented communities in the industry. The people who most need blockchain are people in developing countries, where it could take the place of their missing infrastructure and raise their standards of living. But few people in developing nations have access to the community.

So we have a lot of work to do to remove the barriers to entry in the field.

In the last five years, my priorities have changed in some big ways, but in many ways they’ve stayed the same.

I came to UW with the goal of building a solid educational foundation for my career. I always wanted to work on new and interesting technologies, and be surrounded by smart people working on whatever is happening.

Now, my work is speeding up faster than I expected, and my priority has shifted to launching my career. I’m proud of myself for taking the risk to start Chainguru.

A lot of people in the early days of the Internet dropped out of college or didn’t go to school at all. For me, the worst thing would be to stay in school, and then look back five years from now and think, man, I could have gotten involved in blockchain. Even though I don’t know where this road will take me, I know it was the right decision.